In an Instagram message obtained by The North Carolina Beat of Austin Hinnant, the father of 5-year-old Cannon Hinnant says the man who killed his son was “under the influence of something.”

The message obtained shows Austin Hinnant messaging an Instagram page named Uncle Sams Misguided Children, which is a community founded by United States Marine Veterans to bring awareness of the lamestream media, according to their website.

According to Austin’s Instagram messages, Sessoms was invited to their home Saturday night for dinner. Austin said he told Sessoms that the Lord says, “love the neighbor.”

On Sunday, it was a different day for Hinnant’s family. They learned that Sessoms had shot Cannon in the head in front of his cousin and siblings.

I had to pick my son up off the ground as he bled from his head screaming NO, NO! Austin said.

Austin said a neighbor rushed to Cannon with an EMT bag to assist the baby boy until police and paramedics arrived.

After police and paramedics arrived and transported him to the local hospital within an hour, I was told my son was no longer with us, Austin said.

Sessoms was apprehended Monday evening in Goldsboro, North Carolina by the U.S. Marshals. He appeared court Tuesday virtually and advised the courts that he would be hiring an attorney to represent him against the first-degree murder charges.

He remains in Wilson County Jail with no bond.

Austin says he wants justice for his son. 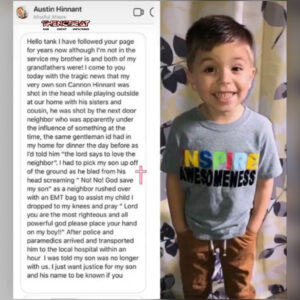