A North Carolina fire chief has resigned after he threatened to run over peaceful protesters.

Triangle Volunteer Fire Department Chief, Steven Jennings sent a letter to Pamlico County Fire Marshal’s Office apologizing for a ‘disgusting’ comment he made on social media over the weekend.

During a Facebook live video, Jennings told protesters performing a “die-in” in front of New Bern City Hall that if they came to lay on the road in front of his driveway, they would quickly become a greasy spot in the highway. (Read Comment Below)

These comments uttered by Jennings has forced him to resign. The protesters were peaceful during their demonstration, and for Jennings to make such comments, he doesn’t deserve to have a job in emergency services.

In Jenning’s fake apology, which is nothing but a public relations stunt, he says that his comments worsened the situation at hand. (Speaking on the death of George Floyd) 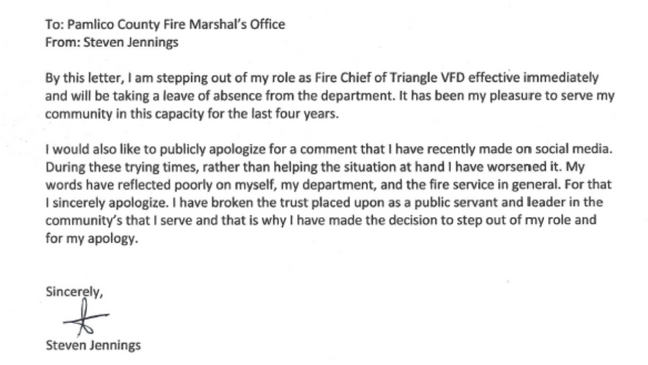 For Jennings to not one time mention George Floyd in his letter, he owes the family and friends of Mr. Floyd an apology for disrespecting a peaceful vigil in his honor.

WE DO NOT ACCEPT YOUR FAKE ASS APOLOGY!!!!

The first case of Monkeypox in North Carolina has...
Read more
Previous article17-year-old girl who filmed death of George Floyd says she is traumatized
Next articleGeorge Floyd viewing and memorial service will be held in Raeford this Saturday