A post circulating social media about the death of 5-year-old Cannon Hinnant is false, according to Wilson Police Department.

On Friday morning, The North Carolina Beat received emails about a post circulating on social media accusing Austin Hinnant, the father of Cannon Hinnant and Darius Sessoms, Cannon’s alleged killer of getting high and later into an argument that led to the shooting death of Cannon.

The post stated that on the day Cannon was killed, Sunday, August 9, Sessoms was invited over to their home earlier in the day to do drugs. The post goes on to say that the two men got into an argument after getting high and that Sessoms accidentally struck Cannon with a stray bullet while aiming for Austin.

Although Wilson Police have said the post contains false information, they have yet to deny if the information came from the agency or if an officer close to the investigation is talking and shouldn’t be. 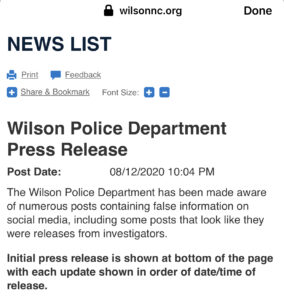 It is unknown where the post originally came from, but it is circulating uncontrollably on social media.

It is so sad that people are really making up false information about this case all because it doesn’t make sense for a man to just kill a 5-year-old child like that. In these days and times, people are just that crazy and is capable of anything.