Even after the world seen Derek Chauvin with his knee on George Floyd’s neck, some police officers still don’t get it. With everything else the police can use to apprehend a person while they are on the ground, some officers result to what Chauvin did. Thankfully, the man, in this case, didn’t die when a Jacksonville, North Carolina police officer put his knee on the man’s kneck.

It happened on Thursday, March 11, around 6:17 p.m. in the McDonald’s parking lot on North Marine Boulevard when Mike Carter of Maple Hill was pulled over for a suspended driver’s license, according to the officer.

In a 1 minute and 16-second video, Carter goes live on Facebook, where you can hear the officer tell Carter that he pulled him over for a suspended driver’s license and to step out of the car. Carter said he was not stepping out of the vehicle, and the officer could be heard in the background saying, “Mr. Carter, you’re making it hard for yourself. It can be an easy citation.” My question is if you’re giving someone a citation, why do they need to step out of the vehicle? The video skips, and then you can hear the officer approaching telling Carter that he’s under arrest.

Another Jacksonville Police officer arrives, who The North Carolina Beat has identified as Officer Eloi Gelinas.

When officer Gelinas pulls up, he comes to Carter’s vehicle and immediately grabs his wrist, while the other officer lets Carter’s wrist go, stands back, and looks for a few seconds. (See Still Image Below) 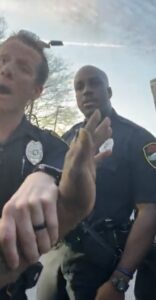 But, if Carter was such a “threat,” then why did the black officer just stand back for a moment while Gelinas tried to get Carter out of the vehicle? The black officer then grabs Carter’s phone, and the recording stops. (Watch Carter’s Video Below)

Across the street is a bystander, who captures where Carter’s video would have continued.

You can see Carter stepping out of the vehicle with his right hand up because officer Gelinas still has a grip on Carter’s left-hand wrist. The black officer proceeds to put his arm around Carter’s neck as both officers try to get him on the ground. Another unidentified officer approaches and places his knee on Carter’s neck while officer Gelinas and the black officer try to cuff Carter. (Watch Bystander Video Below)

When will it stop? When will Black men stop being treated as the target or suspect the moment some police officers approach us? We need change, and we need real leaders to stand up and help us change this outcome that sometimes leads to death when black men have encounters with the police.

We are still trying to identify the black officer and the officer who put his knee on Carter’s neck.

The North Carolina Beat reached out to Carter for a statement, but he was not immediately available.