ReOpenNC leader that survived COVID-19 was NOT at any rally, WRAL is #FAKENEWS

The worst President in America's history, Donald Trump, is being exposed yet again for his criminal activity, this time...
Read more

A North Carolina dog breeder is threatening to file lawsuits against people sharing a video of her abusing a...
Read more

Gerald Jacksonhttps://thencbeat.com
Hi, my name is Gerald Jackson and I am 24-years-old. I was born and raised in Troy, Alabama. I currently reside in North Carolina. I am a Journalist, Influencer, Content Creator, and a Man of Faith! I have been blogging for 4 years and I love it! I don't shy away from the truth, always speak my mind, and before I take anything back, I'll add more to it. Follow me on my social media below to keep up with my personal life. LOL!
FacebookTweetPinEmailPrintLinkedIn

WRAL-TV in Raleigh, North Carolina is reporting #FAKENEWS about one of the ReOpenNC leaders, Audrey Whitlock.
Monday afternoon, WRAL took to their social media page, which has over half a million followers, to report that Whitlock had tested positive for COVID-19, however, the truth of the matter is that they are WEEKS behind.

Although Whitlock tested positive for the coronavirus, she did not participate in any of the ReOpenNC rallies. Instead of WRAL posting that information after they received it, they pushed a narrative as if Whitlock was at the recent protests and many could have been exposed to the virus because of her. What they said simply is not true.

According to sources, WRAL is not fond of the ReOpenNC Facebook group. Their goal is to destroy the grassroots organization and they have officially launched their first attack in an attempt to do that just a day before the next scheduled protest on Tuesday, April 28. Sources say that WRAL knew Whitlock tested positive weeks ago but wanted to launch an attack against her and the group.

Many people are certain that WRAL tried to do this in a way that will keep people who are in support of reopening North Carolina away from the protest. By doing that, it would, in turn, say to government leaders that more people want to keep things closed down, in order to err on the side of caution than to reopen quickly and chance a spike of new infections.

Kristen Elizabeth, another co-founder of the group, said that Whitlock survived COVID-19 and quarantined herself for 14 days, per the recommendation of the health department, and that she was not at ANY of the ReOpenNC rallies. 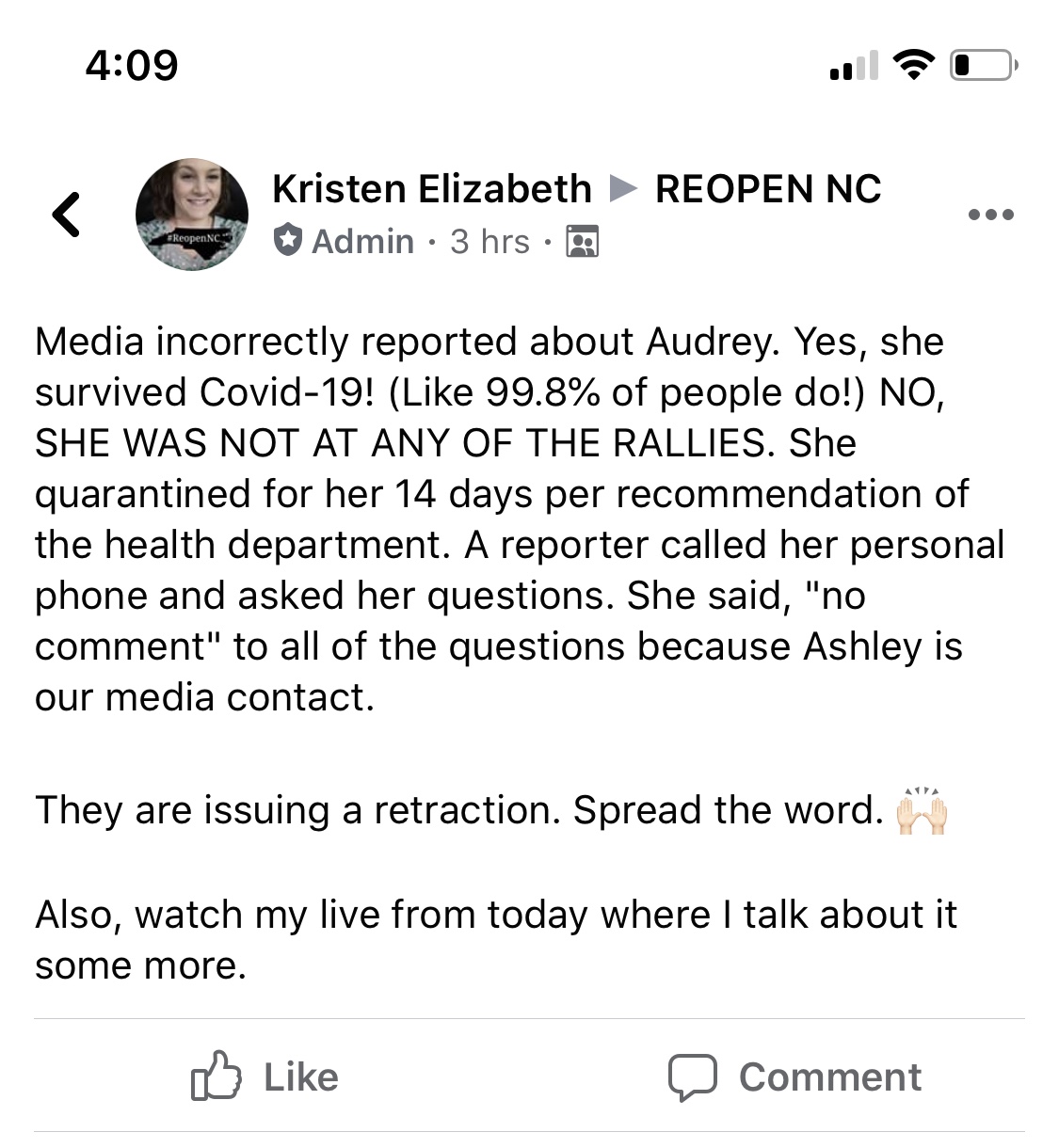 WRAL deleted their Facebook post about Whitley after they were slammed with phone calls and emails criticizing them about the #FAKENEWS they reported.
According to the FCC’s website,
“broadcasting false information about a crime or a catastrophe if the broadcaster knows the information is false and will cause substantial ‘public harm’ if aired.”

“FCC rules specifically say that “the public harm: must begin immediately and cause direct and actual damage to property or the health or safety of the general public, or divert law enforcement or public health and safety authorities from their duties.”

Given the current situation in this country with people at their breaking points due to the stress caused by this pandemic, falsely reporting that an individual is currently infected with COVID-19 and had just been at a protest with hundreds of people is a clear violation of the aforementioned rule.

We have already seen Asians, regardless of what country they are from, being brutally attacked because of ignorant people blaming them for the pandemic. Mrs. Whitley could have easily been the target of a similar attack due to the irresponsible reporting by WRAL.

If they have not already been contacted by the FCC regarding this matter, I hope that they will be after enough people contact them to report the violation.

The worst President in America's history, Donald Trump, is being exposed yet again for his criminal activity, this time...
Read more
News

A North Carolina dog breeder is threatening to file lawsuits against people sharing a video of her abusing a pregnant German Shephard dog. The woman's...
Read more
Politics

At the Onslow County Sheriff's Office in Jacksonville, North Carolina, seven detention officers have tested positive for the coronavirus. According to county officials, those employees...
Read more

A North Carolina dog breeder is threatening to file lawsuits against people sharing a video of her abusing a pregnant German Shephard dog. The woman's...
Read more

At the Onslow County Sheriff's Office in Jacksonville, North Carolina, seven detention officers have tested positive for the coronavirus. According to county officials, those employees...
Read more

The sleazebag woman who was seen in a viral video back in June of 2020 threatening an elderly customer charges have been dismissed, according...
Read more

According to the Associated Press, two National Guard members have been removed from an assignment to secure Joe Biden's inauguration. U.S. Army officials and a...
Read more

ABOUT US
Your source for RAW, UNCUT, and Unfiltered News in North Carolina.
Contact us: newstip@thencbeat.com
FOLLOW US
© 2020 The North Carolina Beat, LLC. All Rights Reserved
wpDiscuz
0
0
Would love your thoughts, please comment.x
()
x
| Reply
MORE STORIES

Trump campaign paid $2.7 million to individuals and firms that organized...