Racist Owner of Johnson Family BBQ in Durham tell customers to ‘suck his d*ck’, and call Blacks the “N” Word

Send me your story to gjackson@thencbeat.com | “Let Us Put They Ass On Blast!”

Wayne and Allison Johnson, the owners of Johnson Family BBQ located in Durham, North Carolina are making it known that they do not like Black people, especially those that live in the BULL CITY.

You don’t have to have a personal conversation with the sleazebag owners like Durham’s Mayor, Steve Schewel’s, did to know that Wayne and his wife, Allison are racist. (Wonder How Mayor Steve Schewel’s Will Respond?)

Precious Walker, a postmates driver, took to Facebook to share her recent encounter with the owners of the now struggling business, saying that Allison, the co-owner, was rude after she arrived to pick up a customer’s order. (READ THE POST BELOW) 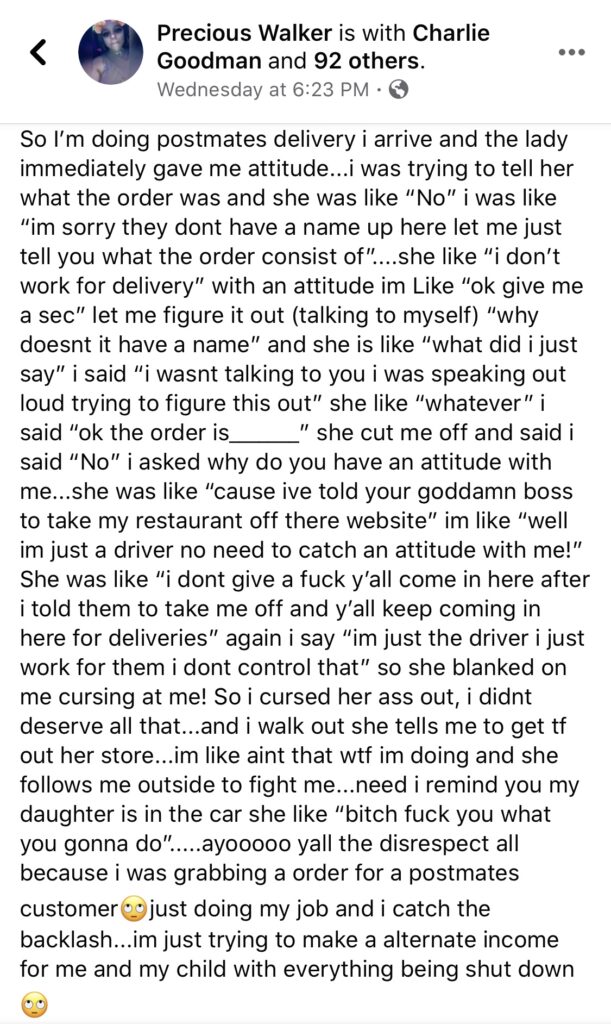 Customers who also patronized the businesses left reviews on the Johnson Family BBQ Facebook page about the terrible food and customer service.

Co-owner Wayne Johnson responded to the reviews calling customers “nigger cunts” and telling them to “suck his dick.” (READ SCREENSHOTS BELOW)

Residents in Durham are now calling for Mayor Steve Schewel’s to address the racist comments made by his friends, Wayne and Allison Johnson.

Local activists in Durham are calling for a boycott of the business.

The North Carolina Beat reached out to Wayne and Allison, and they tell me they are preparing a lawsuit against postmates driver, Precious Walker.

We asked Mr. Wayne Johnson about his online comments, and he stated to me that he has plenty of money and doesn’t need the Blacks business.

I’m surprised that some of the folks over near central McDougal Terrace who wear certain colors haven’t shown up yet!

You shouldn’t be racist period because it’s ignorant, BUT you should be afraid to be racist in Durham of all places.

As gas in America skyrockets, Democrats in North Carolina...
Read more
Previous articleBreaking News: Pitt County residents will be ordered to shelter in place Wednesday
Next articleTwo die of Coronavirus in North Carolina

I suspect most will stop going to Johnson Family BBQ and he will fade away. Give karma a chance to come full circle. This story just needs to be shared repeatedly and then some more.

With Durham being almost 40% Black, this business will NOT survive.
BOYCOTT.

Drive them out to redneckville.

Sounds like the author is trying to solicit violence against these racist a-holes. Odd after talking about the dangers of being racist in Durham, you post the establishments address.
The owners are trash for acting this way and treating ppl as such, but the author isnt much better. Your incognito call to violence is sickening.
You sir are responsible for what happens to people in stories you write if someone reads your article and decides to hurt this ppl based on your words.
Ironically though those folks over near central McDougal Terrace who wear certain colors probably dont read thencbeat

Thanks for sharing this bad news. I went to this place a couple times with coworkers. Sat next to Phil Ford in the crowded, tiny dining area once (sat outside the other time).

That lady was mean and unpleasant both times. The food was mediocre. And the place was generally kind of nasty.

Anyway, won’t go again (if it even can stay open).

Yes boycott his piece of shit restaurant. Him and his ole lady might wanna hire a guard. I hear some folks in Durham NC don’t play

Conspiracy theory: Perhaps they refused to become freemasons, so they were made social pariahs. Just like anyone who refuses the agenda. But at the same time, I remember when I went in their once, I was young. The lady in the picture was the server, she had a look of prejudice in her eyes, that became indifference and somewhat caring, after seeing my young age. imagine going to the diner and being served by the husky tough woman with a cigarette in her mouth. That’s how she was. Racism or sass? But they literally had black fucking workers so I… Read more »

I don’t understand white people sometimes, because if it wasn’t for us it would be no them. We are the ones that contributed the most to get them where they are today. They stripped us from all of our rights, everything, that’s why we don’t have anything today. They took over our inventions and our land and left us with nothing. They have used us from the beginning of time. When we look at them we should see the richness and power within ourselves and know that we contributed to the world. They have brainwashed us to think we are… Read more »

Gerald, I know your mad and I can’t understand that anger as a white woman, but please don’t imply that someone needs to go take care of this idiot. Somebody’s baby is gonna go try to be a hero and get hurt or get caught and put away for life. Just by writing this article you already hurt him where it matters. He’ll be a sad, pathetic, prick with a failed business because of his racism. Karma will get him. Believe.

Hi KC, I am not mad and I am not responsible for what happens to anyone on any story that I write!