17-year-old Raleigh girl missing, may be in Durham with man

The mother of a 17-year-old missing Raleigh girl is asking the public to help her find her daughter.

17-year-old Shaniah Matia Teasley went missing Friday, April 3, 2020, and is believed to be with 23-year-old Josia Shoffner of Durham.

Shaniah is 5’5″ and weighs approximately 130 pounds. She was last seen in the Washington Terrace area in Raleigh and now is believed to be in the Durham area with Shoffner. 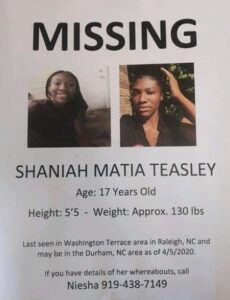 Shaniah’s mom, Niesha Teasley told The North Carolina Beat that she spoke with Shoffner’s mom early Monday morning who told her that Shoffner cleared his name with the Durham and Raleigh Police Department.

Raleigh Police Department told The North Carolina Beat Monday that they located and returned Shaniah to her family on April 3, 2020, after she went missing. But the case has now been turned over to Wake County Sheriff’s Department.

We are still awaiting a response from the Durham Police Department

Mother Teasley tells us that she had received calls of her daughter and Shoffner spotted together after Shoffner claimed he had nothing to do with the missing 17-year-old.

If you have any information about the whereabouts of Shania, please call her mother, Niesha at (919)-438-7149.

Charlotte man charged with having sex with dog in broad daylight

All these parking lot lizards out here giving up...
Read more
Previous articleParents name their twins after the coronavirus, Covid and Corona
Next articleGas ain’t been this cheap since 1993